To build in an industrial estate is to build without references or interferences. A flat surface, a marked sun and an office-showroom program.

The exceptional is the client. The multinational of the Galician granite, DFG-pavestone, has quarries all over the world and cutting-edge technology for cutting and optimizing the stone.

The building is born of optimized construction system and without rhetoric. It is conceived as a clean and simple ship. Inside this envelope are the offices and warehouses with elementary construction of glass, polycarbonate and metal. The container escapes the constructive complexity, focuses on generating a clear and white atmosphere.

The building is the frame and support for the granite. The interior spaces are covered with different types of stone and finishes, with the facade concentrating the greatest formal load. The direct north-south orientation is key to its design. The blue platinum granite lattices overlap the container.

The volume opens directly to the north and closes to the east. The lattice to the west is vertical and turned 45º taking the dimensions of the pieces to the maximum. The effort is concentrated to the south. A granite basket has been built, a fabric of equal pieces. The rotation of this piece allows the setting of the fabric, the light is filtered and the incidence of the sun is controlled.

Space and construction at the service of the stone. 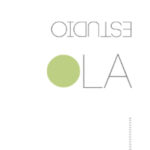 OLAestudio founded and directed by Oscar López Alba, (ETSA A Coruña 2001), in 2011 after having directed the Refurbishment Office of the Camino de Santiago in Sarria-Lugo.

Focused on architecture, refurbishment and urban design, his work has been awarded in different ideas contests. OLA’s work is developed from Galicia with works in Portugal and the peninsula.

Finalists in the FAD 2018 Awards, XIV Biennial of Architecture and Urbanism, Lledo 2018 Awards, II Arquitectura de Galicia Awards and in different calls for the COAG awards. Gran de Area Award 2017. As a project manager and collaborating with Murado and Elvira Nominated for the EU Mies Award 2019.

His work has been published in different national and international media.