The need to renew the premises of an office block located in a suburb in the north area of Madrid was perceived as a chance to make the most out of an underused building. One intervention after another had made it more and more meaningless, with a broken up and confusing spatial organization structure and an environment that made it difficult for it to be seen from the urban surroundings. The operation entailed a new space management policy for the company, which turned the building into its new corporate headquarters.

From a formal point of view, the project intended to make the particular spatial conditions of the building stand out. It did so by focusing mainly on three elements: the courtyard, the flexible organization of the floors and the image of the building, along with a thrifty investment, which called for extraordinary precision in all interventions.

From the outside, the building was hardly perceived in a comprehensible way. It was a compact volume without a clear front due to the main entrance being in a small steep side street, perpendicular to the main road, where the car entrance was located. Furthermore, the entrance itself was below ground level. On the other hand, the east elevation, visible from the Road to Humera, which belongs to one of the short building’s bays, remained behind the car park, out of which its roof and three ventilation unit huts protruded.

The entrance was changed, generating a great open square as a consequence of doing away with all the detached protruding volumes. And the building was opened on its most visible corner, breaking the façade’s uniformity.

In front of the façade, which has ceramic cladding, galvanized cold-drawn steel protection slats of varying opacity were fixed, joined by horizontal catwalks of variable size according to the orientation of the façade with the idea of avoiding direct sun light. The proposal for the building’s façades sought to improve their thermal properties and their image without changing their size or their openings.

From a functional point of view, as a basic starting point, the uses were to be reorganized and ordered so that offices and technical rooms became independent and didn’t interfere with each other. Hence, the DPCs and equipment rooms were concentrated on the lower ground floor and basement and the upper floors would house the offices. This distribution allows for both the circulation areas and the building services to be independent. The only intervention took place in the inside distribution and the finishes so that the building maintained its structure and its communication cores. Partitions and screens were done away with in the upper floors and then reorganized as an open plan office.

First to third floors maintain a similar spatial structure. The communication cores concentrate all the floor’s amenities (toilets, archive, vending machines, etc.) and the façades were liberated, thus allowing an open organization in the rest of the floor. The work stations were organized in an open plan scheme, always with natural light, which was guided from the reprography areas, conceived as small open spaces delimited by low screens. The two service cores are located on either ends of the floors and allow for great flexibility in the setting up of the offices.

The courtyard, accessible only for maintenance duties and occupied by HVAC machinery, was another focal point of the intervention. The patio walls, cladded with small dark ceramic pieces, were covered with a continuous light-finish coating, providing greater brightness to the spaces that overlook it. Inside, the patio is independent from the vertical cores; it became detached by freeing its four elevations. As with the entrance to the building, the entrance to the offices from the cores is opposite the patio, again achieving that visual amplitude of the space. The glazed area was increased, substituting the blind corner walls with glazing with metalwork and modulation similar to the existing ones. From the offices, once the mirror effect of the windows was dealt with, a greater visual link was achieved between the two bays, allowing for the spatial perception of the whole floor.

A pergola of rectangular strips, which change their orientation in oblique angles, make up an open ceiling, which serves as a visual filter and that configures and characterizes a delimited outdoor space.

ACXT-IDOM The close coexistence between two points of view, architecture and engineering, has given us the opportunity to see how extraordinarily productive dialogue between the realm of ideas and art can be. The rapport between teams of experienced architects and engineers in Idom, along with the determination to relate any particular point of view to the needs of customers in order to provide a truly integrated service, has enabled us to participate in some of the most emblematic and complex modern buildings. 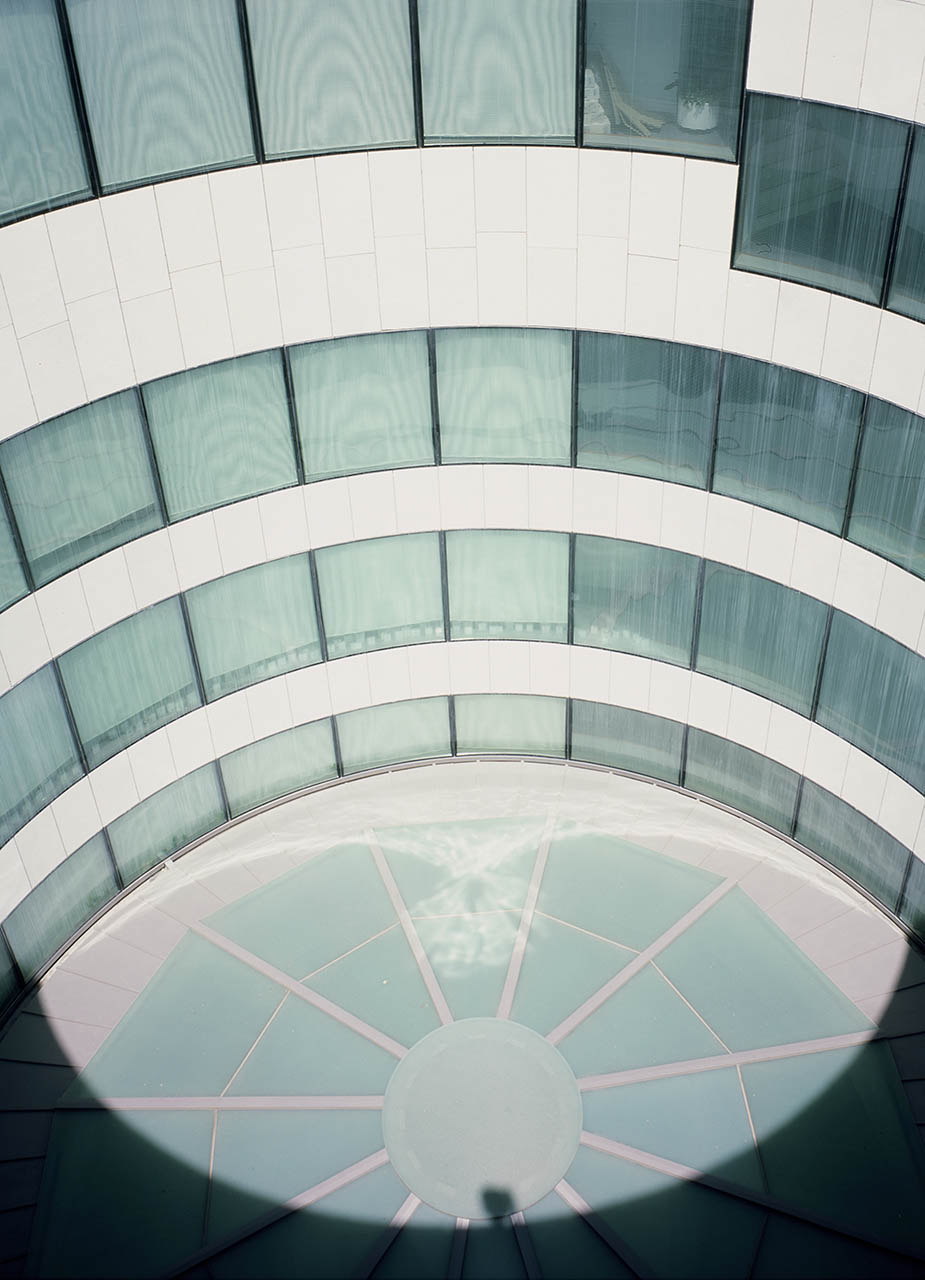 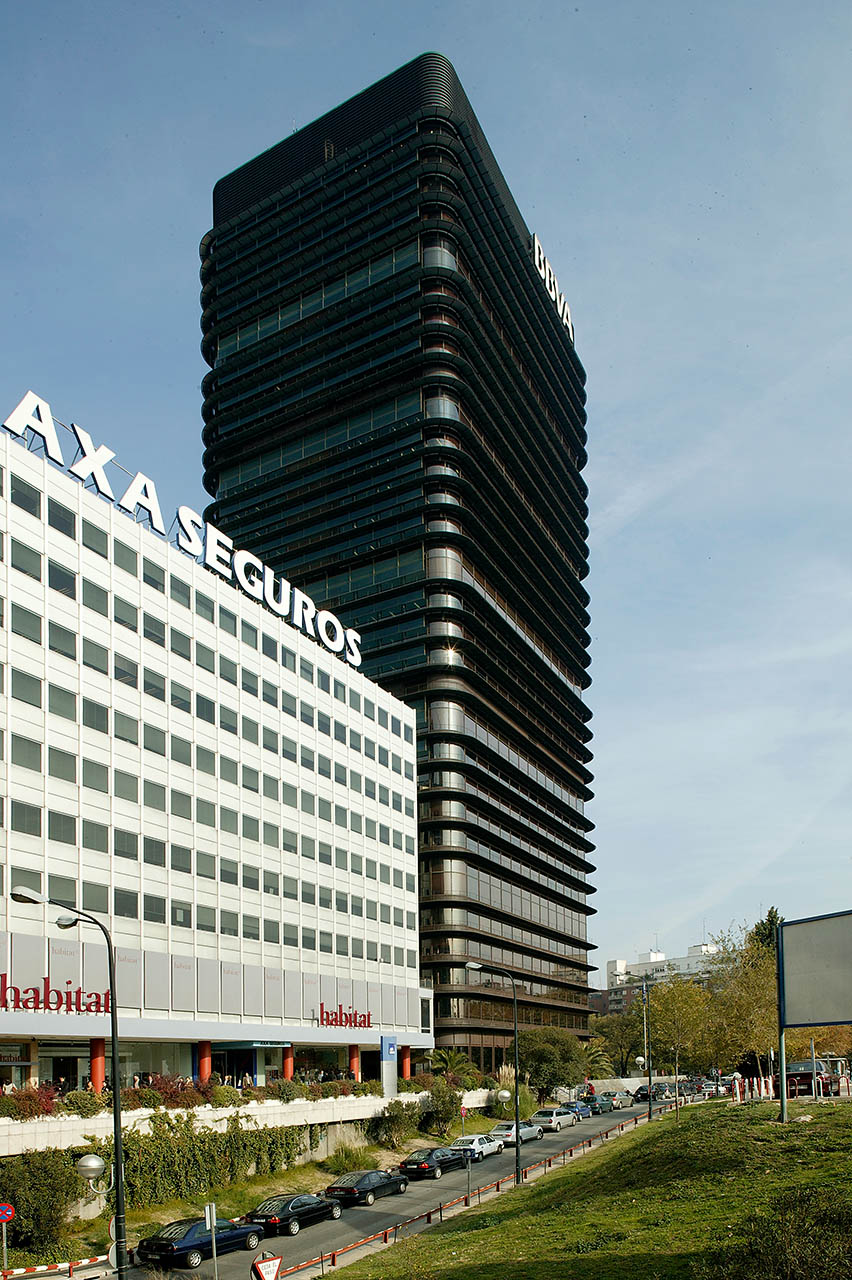 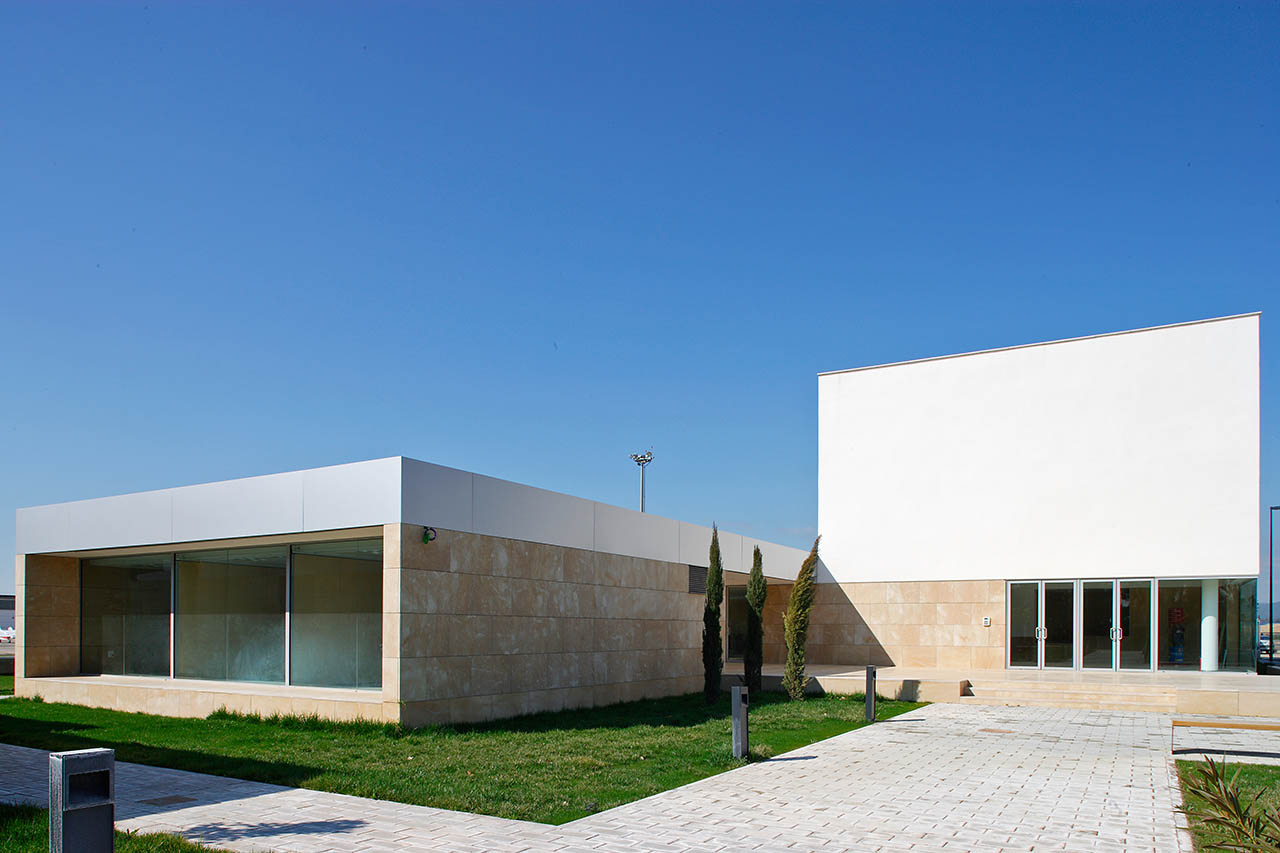 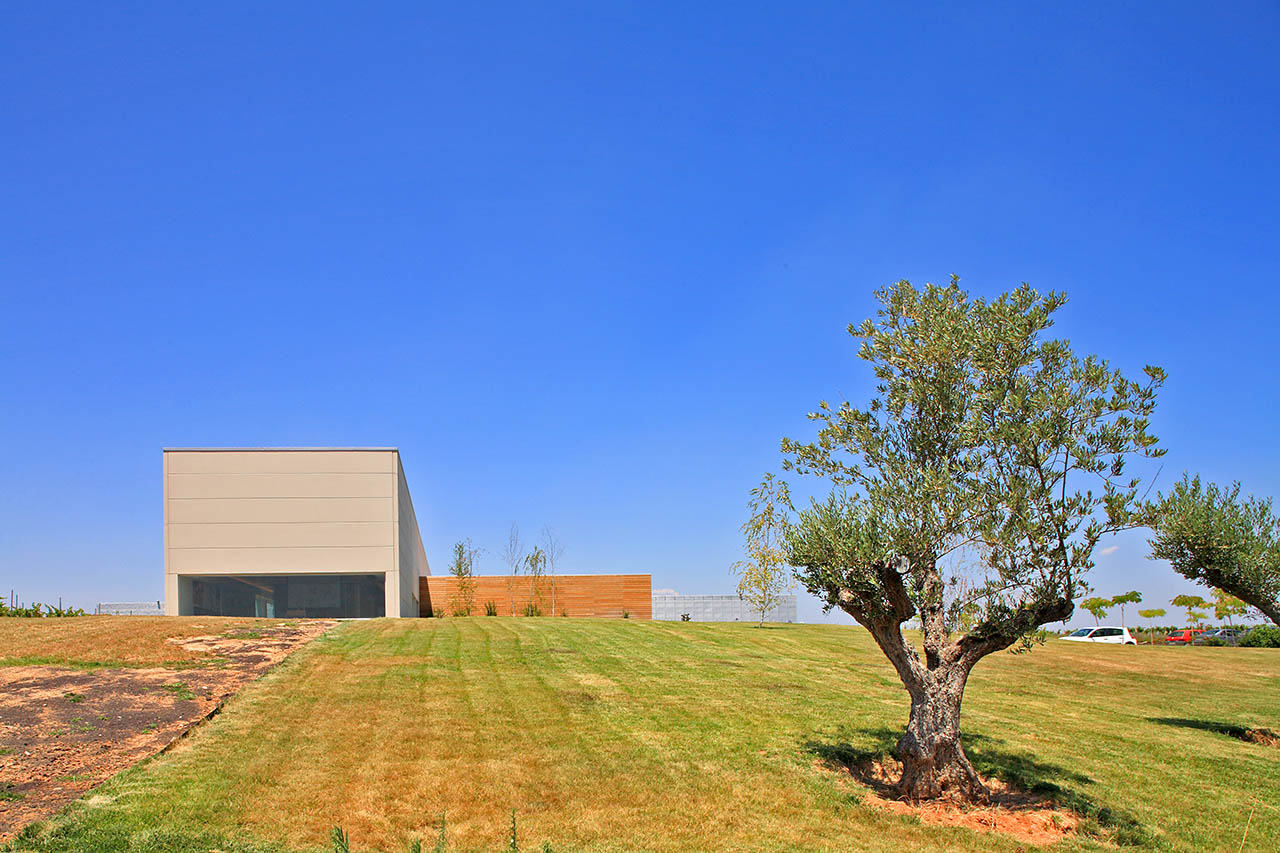 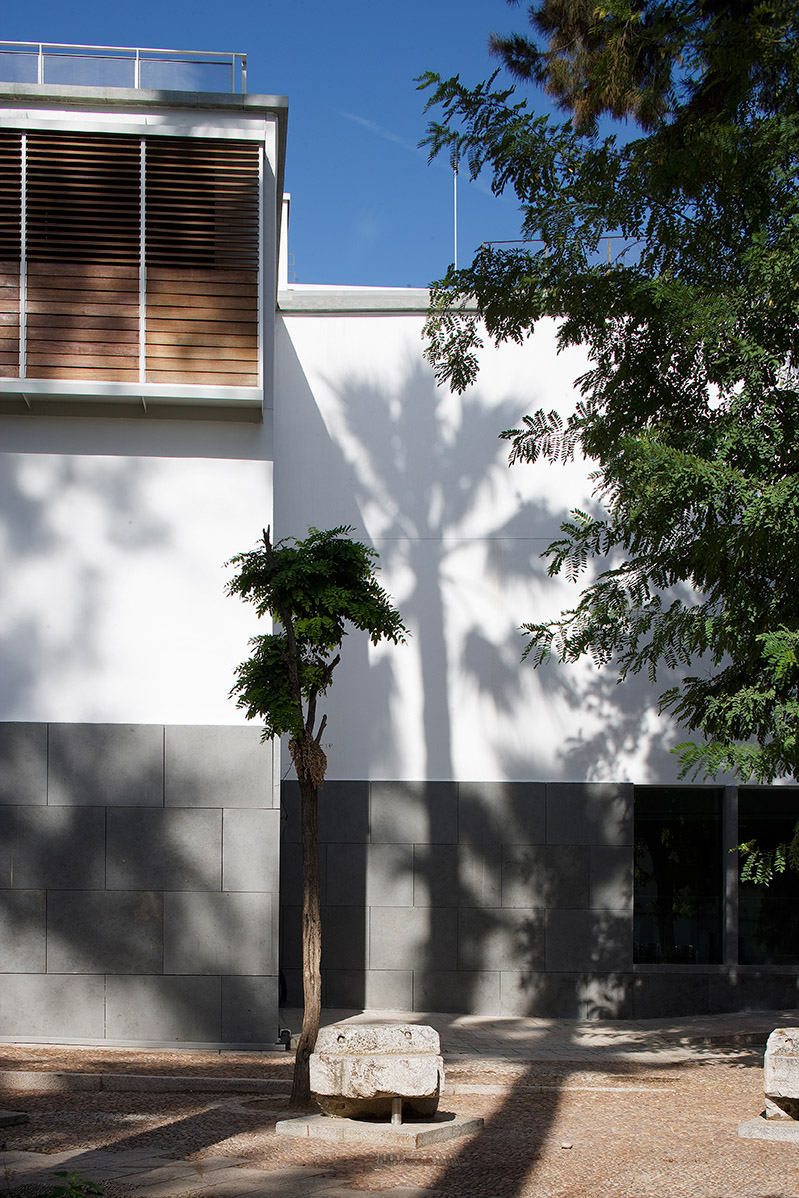