In ENERO Arquitectura, we carried out the expansion and renovation of the current Hospital Universitario Quirón Madrid. With this intervention, what is sought is to complete the existing functional program, taking as a basic premise the search for natural light, a design of friendly spaces, both for the patient and for the rest of users and have an energetic behavior optimal in accordance with its location. All this, keeping in mind the human scale on a contemporary architecture and the excellent architecture of the previous proposal.
The extension building is conceived as an extension of the east-west longitudinal axis of the complex following the same functional sequence of courtyards and communication cores. The two-dimensional grid is completed on its north-south axis by a final volume that closes the building.
The main volume of the new extension is located in the eastern part of the plot, which borders the M-502 – Carabanchel Road- and houses the functional program aimed at strengthening the maternal and child area. The new volume is developed on the ground floor, first and second floor, with two basement floors; and integrates in height with the existing building.
The extension building, in addition to being internally connected to the existing building through the volume that resolves the longitudinal circulation of the set, will have an independent access by means of a lane that will have access through Diego street. Velázquez and that will extend along practically the entire southern boundary.
The new access lane will lead to the open courtyard that is generated between the new building and the last existing hospitalization block. As a consequence of the construction of the extension building, in the current building, uses are transferred to the new one, freeing spaces that are objects of reform or increasing the number of existing units. 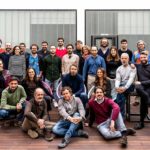 The team of ENERO Architecture is multidisciplinary and is the cornerstone of our vision of study. We have architects, engineers, project managers, technical architects, interior designers and different specialized profiles that provide the best of themselves and that believe in the idea of ENERO.
Lista completa de categorías
Subscribe to our newsletter
debug