The house is built in the small Hamlet of Les Terrasses, in the french Alps, right in front the massive pick of La Meije (3984 m) and its glaciers.
The architectural comision consisted in the construction of a two secondary dwelling building, in a small and steeply sloping site, that would serve two brothers and their families as an ocasional holliday meeting point.
Achieving a respectuous and integrated building in the local tradition although with a modern twist, was one of the harder tasks, that was made trhough open understanding and positive negotiation of architectural regulations of the village, and by integrating the excellent «savoir faire» of local artisans.

Architectural typologie
The local urban regulations protect the villages of the valley of La Romanche as part of the anthropic landscape that surrounds the national park of Les Ecrins, wich was modelled for centuries by farming and cattle rising. Its vernacular architectural type is called « chalet d’Alpage », a single story house made of masonry, wich hosted both people and animals under a wooden sloped roof that served also as hay storage. The new constructions may therefore meet regulations such as a certain volume (two sloped roof), finishing materials (stone, cement rendering) or preminently vertical proportions of the windows.
The solution given to the comision, will search for the volumetrical integration in the rural landscape by a single three story building partially buried in the slope, with a rectangular floor plan 15,5 m L x 6,5 m W , with similar dimensions as houses around.
The two dwellings program of three bedrooms , in 95 and 75 square meters will be organised in this common building that hosts two row houses wich share a common entrance in the north-east facade.
The building sticks to its back plot limit, remaining the whole groundfloor buried in three of its four sides, and letting in front of the 2 southern facades, both house gardens in different levels and orientations.
Construction
The traditional constructive system, made of masonry walls and larch wood, has evolved in modern constructions in the valley of La Romanche, by different reasons, wich include economy and building regulations: In the present, the walls are usually built with reinforced concrete, that ensures statical requirements within a restreinted thickness, and are later enveloped by stone masonry or rendered with traditional textured mortar. The mountain wooden roofs are a whole chapter in french construction, and they are still evolving. They are a very efficient solution to deal with high loads of snow, and big isolation needs.
A big effort is made to refine the traditional constructive system and take advantage of its expresive posibilites. Therefore, reinforced concrete is used as structural and finishing material in search of a a poetical rigour and simplicity. Concrete provides an homogeneous and flexible shell, that allows large spans and a relatively fast construction in this context, in continuity with foundations and retaining walls. The beige pigmentation and the sandblasting finishing, blends the building with the prevailling colours of the landscape and the village.

Interior layout
The interior of both dwelings is designed with the following goals:
1 Making the habitants enjoy as much as possible the stunning views of the valley and the peak of La Meije by designing concrete perceptive situations, in relation to openings in facades and roof. la
2 Using the section design to enhance the vertical distribution of both dwellings, by opening voids on the second floor that will spread light all over the fist floor, and generate vertical connexions coloured by a ludic purpose.
3 To enhance the larch roof and its contrast with the interior spaces. Its wooden structure, visible from the last two floors, rythms the interior and add character and a spatial reference that unifies the spaces and connects with the work of local artisans.
Larchwood, that is the dominant tree in the valley, will be also used for windows and floors.

The frontwalls and the long southeast facade are pierced following the inside layout criteria allready explained, by also creating outside covered spaces that will serve to stock wood or protect the acces.
The southeast facade, higher than the rest , appears as a big canvas to be cutted following the needs of main and secondary spaces of both appartments. The picture windows are designed in detail using vertical brisesoleils, and big wooden frames to achieve all the design aims (sun protection, terrace, panoramic picture window)  within the urban regulations.
The dinamic composition of the facade with oversized square picture-windows , creates an intermediary scale that soften the massive volume of the building. Opposite to the discreet chalet blended in the village that we can observe from the road, the building reveals itself to the curious hiker that rounds the building as an unexpected screen with a singlular scale that looks and admires the overwhelming beauty of la Meije’s massif.
Energetic efficiency
By accomplying the french norm RT2012, a high performance isolation enveloppe keeps the needs of energy of the building very low, alghough in very cold winters. Heating is provided by stoves, and warm wáter by heat pumps working on the ventilation system. The house is easily heated by the sun that enters the house by its windows, and heating is only necessary in foggy days. 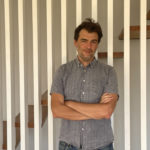 Ramón Durántez Fernández (Madrid, 1974) is architect graduated in Architecture in the Universidad Politécnica of Madrid, ETSAM in year 2002. He has mainly established a practice as independent or associated office (Na arquitectos) in Spain and France, but also colaborated as consultant for other enterprises of architecture, urbanism ane engenieering (RLH,Urbanites), having designed and built or developed urban plans in France, Switzerland and Spain.
He leads his office from Madrid (Ramon Durantez Arch.) , working mainly in renovation of public and private spaces and building. The office is able to work efficiently in any of this three countries with teams adapted to the scale and nationality of the proyect.
He has been awarded in buildings and competitions in his consultant practice and in his independent practice, highliting in the latter :
Special Jury prize : Built housing Unit in the region PACA , prize SACA-ARCHICOTE. France 2022
Second Prize : Dwelling competition for EMV. VPO Vallecas Ensanche 16. COAM –EMV. Madrid, Spain, 2003
Ramón Durántez developes parallely a research activity, focused in experimental architecture and urbanism in the third quarter of the twentieth century, whose results have been published and exposed in diferent congresses and workshops.