The Centro Botín is a new space for art, culture and the diverse activities of the Fundación Botín. It is constructed in the Jardines de Pereda, on the seafront of the city of Santander in north-western Spain. The project reclaims an area currently used as a car park, restoring it to the city. The site, organized as an extension of the city grid through the existing park, provides direct access from the historic town centre to the sea and enhances visual connections with the water.
The building is a new landmark on the waterfront, both from a visual and cultural perspective, as well as a mean of boosting the activities of the Botín Foundation. Thanks to the Foundation’s diverse cultural and research programmes, it is expected that the centre drives cultural, social and economic development in Santander.
By rerouting traffic on the existing Paseo del Muelle into a 200m-long tunnel, the existing Jardines de Pereda can be extended as far as the seafront, doubling its size. The Centro de Arte Botín sits in the new section of the park, right at the water’s edge. To its north, where various routes across the park from the city converge, is a new public plaza. An outdoor amphitheatre on the building’s west side can seat 2,000 people for concerts or film projections.
The centre is organized into two parts, a west and an east wing, joined by an elevated walkway that culminates in a platform cantilevered out over the sea.
The west wing of the building is an exhibition space: 2,500 sq. meters of 5m-high versatile spaces over two levels providing galleries and support areas. The upper level has a skylight system that allows some of the gallery space to be naturally lit.
The smaller east wing focuses on education and accommodates a convertible 7.5m-high auditorium space with 300 removable seats and, on the building’s upper level, a multi-purpose area of approximately 255 sq m. The auditorium has a glazed façade to the south, offering the option to have speakers, actors or musicians performing against the backdrop of the bay with its traffic of ships.
Both buildings are raised thanks to supporting columns. Together with the buildings’ curved shape, this structure lightens the facility’s presence on the site and allows clear views from the park to the sea. The curved edges also draw light and reflections off the water into the space under the building. The exterior are clad with small off-white ceramic tiles that easily adapt to the shape of the building and that also have a shimmering, mother-of-pearl finish, which strengthens the building’s luminosity, under Santander’s often grey sky. 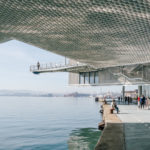 The Renzo Piano Building Workshop (RPBW) was established in 1981 by Renzo Piano with offices in Genoa, Italy and Paris, France. The practice has since expanded and now also operates from New York.
RPBW is led by 9 partners, including founder and Pritzker Prize laureate, architect Renzo Piano.
The practice permanently employs about 130 architects together with a further 30 support staff including 3D visualization artists, model makers, archivers, administrative and secretarial staff.
Our staff has a wide experience of working in multi-disciplinary teams on building projects in France, Italy and abroad.
As architects, we are involved in the projects from start to finish. We usually provide full architectural design services and consultancy services during the construction phase. Our design skills extend beyond mere architectural services. Our work also includes interior design services, town planning and urban design services, landscape design services and exhibition design services.
RPBW has successfully undertaken and completed over 140 projects around the world.
Currently, among the main projects in progress are: the Academy Museum of Motion Pictures in Los Angeles; the École normale supérieure Paris-Saclay; the Paddington Square in London and; the Toronto Courthouse.
Major projects already completed include: the Centre Georges Pompidou in Paris; the Menil Collection in Houston, Texas; the Kanak Cultural Center in Nouméa, New Caledonia; the Kansaï International Airport Terminal Building in Osaka; the Beyeler Foundation Museum in Basel; the reconstruction of the Potsdamer Platz area in Berlin; the Rome Auditorium; the New York Times Building in New York; the California Academy of Sciences in San Francisco; the Chicago Art Institute expansion in Chicago, Illinois; The Shard in London; Columbia University’s Manhattanville development project in New York City; the Harvard museums in Cambridge, Massachusetts; the Intesa Sanpaolo office building in Turin, Italy; the Kimbell Art Museum expansion in Texas; the Whitney Museum of American Art in New York; the Valletta City Gate in Malta; the Stavros Niarchos Cultural Center in Athens; the Centro Botín in Santander; the New Paris Courthouse and others throughout the world.
Exhibitions of Renzo Piano and RPBW’s works have been held in many cities worldwide, including at the Royal Academy of Arts in London in 2018.
Lista completa de categorías
Subscríbete a nuestra newsletter
debug