The new extension is directly linked to its natural environment. The old facade evolves, generating a second faceted skin that protects and characterizes the new project. The result is a fragmented volume that generates a new public space with its movement, and revamps the old sports center’s image. A triangulated geometry which mirrors its inner pearl towards the outside: a climbing wall for the town residents, intrinsically linked to the mountains.

Implementation: connection between the existing and the new

The extension takes place in the area dedicated to the old fronton court, which over the years, had been gradually transformed into a residual space.
The new facilities scheme is organized among two elements: “The Box” and “The stairs”.

“The box”:
It’s a volume on two different levels; there are two multipurpose rooms of 90sqm and 130sqm, one of them over 12 meters long with fencing facilities, two new changing rooms (female and male), and an adapted accessible locker room. On the first floor there is a 100sqm spinning room, with direct connection to the outside through a large window, and a GYM with more than 300sqm, that overlooks directly into the new main entrance through its façade.

“The stairs”:
The staircase to the upper floor serves as a connection between the old pavilion and the new extension. It is attached to the old solid concrete wall of the frontón court, and some openings have been placed in strategic points as “interior windows”, to allow for a direct visual connection between the new and the old. Under these stairs there is a large storage area, to keep all the material needed during the activities.
Inside the pavilion, new tiers have been built to complement the existing ones.

The climbing wall: a mountain symbol
Peeking towards the end of the corridor is the climbing wall. It has both boulder and high-climbing areas and the mats are removable for occasional reconversions of the space, according to different needs.
All the design was carried out together with local climbing associations in a collaborating process.

A new access: the Square
The project has been thought of taking into account its immediate surroundings too: its access and communications. For this purpose, at an urban scale, a new main access for the entire complex has been created. This access is reached through a completely renovated promenade that ends in a slightly elevated square. This square will work as a new meeting point for both athletes and citizens, connecting them at the same time, to the tennis courts.
The main entrance becomes a bright, large double-height space, always lit up thanks to the main façade and the elongated skylight; a continuous forest of shadows casted by the structure of the building.
The old access becomes a secondary access, linked to the soccer field, and the old changing rooms.

The new program is wrapped and protected with a micro-perforated skin that emerges from the existing metal facade and evolves adapting itself to the geometries and intentions of the new project.

It’s a new shell that gives cohesion and unity to the entire complex. At the same time, it filters the southern light. It’s essential for these spaces with large windows (such as the bodybuilding room, the spinning room and the cafeteria) to have some sort of element that prevents the greenhouse effect in the summer and allows for some radiation in winter.
This new skin also serves as a protective shell, resistant to possible external impacts. And, at the same time, it allows to see through and creates a transparent volume where you can “see without being seen” from the inside. A living façade is created; it dematerializes depending on the time and the light’s direction. 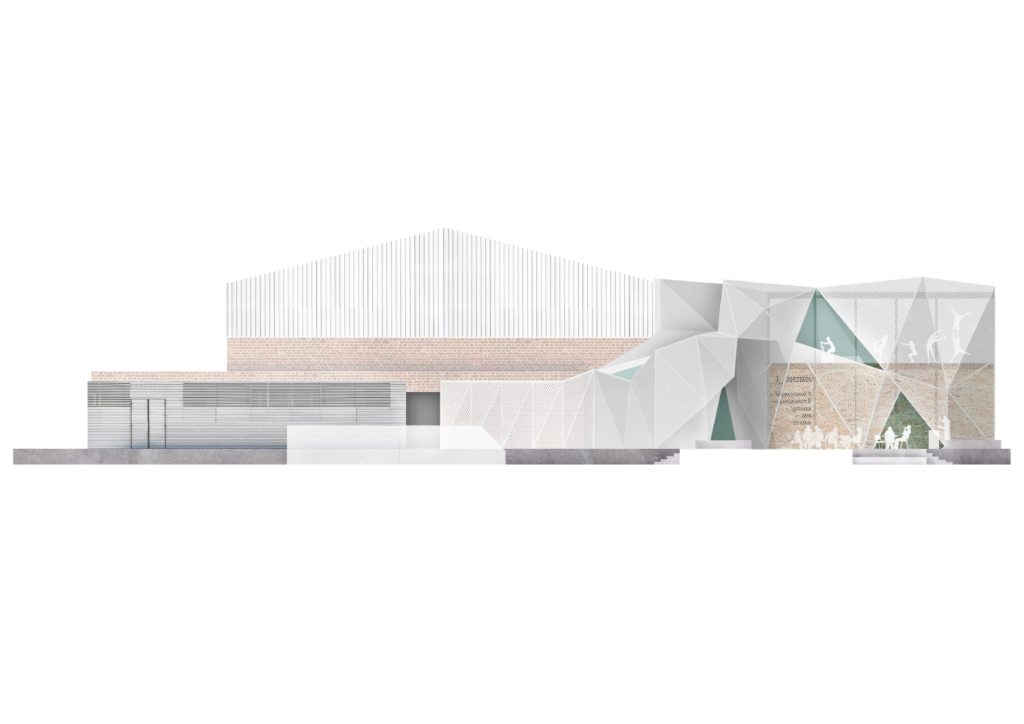 ENKIRO GROUP is a team dedicated to architecture, construction and landscape. Our work is based on the analysis of the context and the user.

We evaluate the time and space that surround a specific project, to develop tailored answers to the client. We approach each project as an opportunity for research and as a chance to regenerate both the perception of the space that surrounds us and the relationships that take place in it.

This idea of design as a tool that allows generating new relationships between users is the engine of all our proposals and the core of our projects.