The work of Petrit Halilaj (Kostërrc, Kosovo, 1986) is tightly bound up with his biography, the recent history of his country, and the consequences of the political and cultural tensions in the region. Childhood memories steeped in the drama of war and refugee life recur throughout his art, which embraces themes like home, nation and cultural identity through a variety of media ranging from drawing and sculpture to video, installation and even writing. However, he does not proclaim a rupture between the personal and intimate and the historical and social, but instead perceives a relationship and continuity to be found in his intervention for the Palacio de Cristal.

Perhaps that is why for this show, the artist’s first solo exhibition in Spain, he was half-jokingly and half-seriously invited to produce “the piece of his life”. Halilaj seems to have taken the proposal almost literally, making artistic material out of his biographical experience. He has turned the Palacio de Cristal into a giant nest that connects the interior with the exterior, linking visitors to their surroundings by opening windows, installing structures, and setting up feeding areas to attract the birds and other creatures inhabiting or transiting through Parque del Retiro. Birds, a recurrent feature of his work, symbolize the transgression of the limits established by modern thought between subject and object, culture and nature. In particular, the artist has drawn inspiration from the extraordinary courtship ritual of bowerbirds, which make elaborate structures (‘bowers’) and decorate them with colorful objects to attract a mate. The idea of this ritual is closely linked to his biography. The large flowers which decorate the nest, made of a delicate steel framework and painted canvas, are the result of collaborative work with his life partner, the artist Álvaro Urbano. Their choice forms part of the personal history that binds them together, and its purpose is to celebrate their union: forsythia, palm seeds, cherry blossom, poppy, carnation, and lily. However, these references are far from remaining mere anecdotes. In being made public, their intimacy acquires an evident social and political dimension. This call for visibility and acceptance becomes even more relevant when we recall the Palacio de Cristal’s colonial past as a place of exhibition and exclusion, together with its function as a public space.

In this respect, it is fundamental for the artist to formulate tensions and cross the limits between public displays that are considered acceptable or worthy of attention and those which on the other hand are censured or scorned. The white raven holding a piece of wood in History of a Hug (2020) speaks of these conventions. It specifically alludes to a particular moment in Halilaj’s family history, being a tool used by his grandfather when working in the country, and the object he was holding when he learned his wife had given birth to their first child. Unable to express his immense joy in public, since this might have been interpreted as a sign of weakness in a patriarchal society, he hugged the post so hard that he thought he might break it. For the artist, the motif of the white raven also suggests diversity and resistance to change in the bid for acceptance. In this sense it is a metaphor of many things, including being a homosexual person whose love is not fully recognized either by his family or by the majority of Kosovar society, and being a Kosovar whose country is not recognized by many other nations, among them Spain.

Like nests in nature, the space devised by Halilaj cannot be regarded as autonomous or separate from its environment, its visitors, and their activities. On the contrary, it is a continuation of them. This relationship, which can be understood as a form of interdependence, resounds throughout the installation — for instance, in the two bird’s feet that make up Here To Remind You (2020) —. Moreover, there is something strange and disproportionate about the size of this nest, the gigantic scale of its flowers, and the comfort and centrality it offers the birds. The artist thus suspends the logocentric perspective that makes us believe we are the center and measure of all things, encouraging us to recognize ourselves as just one more element among many. The nest is thus revealed as the setting for a ritual that lies in wait for encounters, alliances and unions among its different visitors, altering and changing with the space.

To a raven and the hurricanes that from unkown places bring back smells of humans in love is the first exhibition inaugurated by the Museo Reina Sofía since its closure in response to the COVID-19 pandemic, which interrupted the montage of the show. In these circumstances, Halilaj’s proposal could not be more timely. The title’s dedication to the raven and the hurricanes speaks to us of the struggle that precedes acceptance. The current crisis has laid bare the weakness of the economic system our world rests upon and the unsustainability of unlimited growth with our backs turned to nature. It has confronted us with our vulnerability and interdependence and has placed care and affection at the core of a common subsistence that cannot be prolonged without taking the rest of the planet’s inhabitants into account. With this nest, Halilaj offers a refuge, and so raises hope for a possible future different to the one apparently awaiting us. 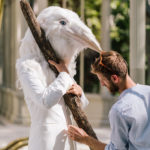